The Iraqi Dinar revalued back in 2013 according to three of Mountain Goat’s contacts (see screenshot below).  Probably the biggest question I get regarding Mountain Goat is not whether or not it’s a man or a woman, but is Mnt Goat’s 2015 intel correct?  I get this question all the time.  I have held back long enough, so I’m putting out a video that I held onto.  I am not one to play favorites because I find all of the dinar gurus to be liars, Tony, RayRen98, Frank26, they are all fakes that would rather line their pockets up with dollars than dinar.  Even I could say I have a “contact in Iraq” and that the “rates are showing on the screens” or that the “cards are loaded”.  You wouldn’t believe me if I did that right?  Why is that?  It’s because you all know who I am, but imagine if I had a persona, and I called myself goldenboy or something like that, and I started out telling you I live in Iraq, then you would be more likely to believe my statements.  I’m not here to lie, I’m here to tell the truth, that is why I do press releases on the Iraqi Dinar and why I also try to warn you of scams involving NDAs (Non disclosure Agreements).  I’m here to help, and you all know that.

December 9, 2015
By: Nick Giammarino
Subscribe to the Dinar RV Newsletter – [OptinLink id=1]CLICK HERE TO SUBSCRIBE TO THE FREE NEWSLETTER[/OptinLink]

So why does Mountain Goat post if he or she doesn’t have a site?  Why would Mt Goat post if not for personal gain?  Obviously it’s great to think that someone would be willing to spend hours each week writing articles for free, (I could use someone like that) but that wouldn’t make sense now would it?  Nobody works for free, except for charity.  So, to me the answer is simple, content. A website cannot exist without content, whether it be original or copied. Someone is obviously paying someone to have the Mountain Goat persona and make these fake predictions and posts.

In the video below, I clearly show how I was able to find an article, written back in 2015, that was rewritten and put on various dinar websites.

Note that in the Dinar Daily thread the members had already posted the original link, unfortunately for me, I didn’t get my video out fast enough and I thought it was too late, but at this point, I now feel I might as well get it out.  It’s important to note that I did notice the deception before I went to Dinar Daily, but it’s besides the point, they are a great site, and I highly recommend you check them out.

I put a handful of screenshots in the video, I will post them below so you can see the lies along with my commentary below each picture.

is the dinar guru that posts a lot of information. Supposedly it’s a woman, but I never knew a woman to lie and deceive as much as this one. Obviously like most of the gurus, Mnt goat does not have a main website, but lots of the posts end up on the various dinar sites like Dinar Daily, Dinar Detectives, Dinar Recaps and of course in the TNT Forum, even though the Mt Goat posts are banned there. 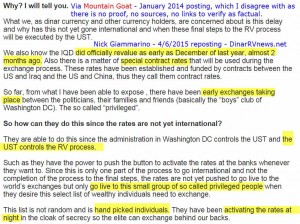 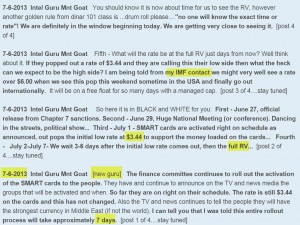 Above are the first posts on the dinar guru website.  This was just a mere two days after TNT Tony left or was fired by PTR (People’s Talk Radio).  Interesting how the Mnt Goat persona was created right after the short disappearance of Tony Renfrow.  Maybe it’s just me, but it doesn’t seem like a coincidence that Mnt Goat was created around this time.

Mountain goat started discussing the Iraqi Dinar revaluation around 2012, by mid 2013 hardly a day went by when you didn’t hear about Goat, either on chat or conference call. Remember that I didn’t get involved until late 2013 so I didn’t really pay attention to the earlier posts.

Regarding this video, I originally recorded it around May of 2015, but I never posted it. I feel like with Tony out of the way I can go after the liars one by one.
As you will see, even though goat never says to run out and buy dinar, you do get the impression that people do just that based on what “intel” they receive.

Goat’s posts are banned in the TNT Activeboard Forum and during chat. I can understand why, you don’t want to get too many liars spreading disinformation at the same time. Yes, it’s all just lies, different people, different lies, but nothing has changed.

In conclusion, to all of you who want to know what I think about Mountain Goat, I don’t care, I don’t listen, it’s a fake individual as evidenced by the weak copy and paste job, but fell free to have your ears tickled by following a made up person.