Planet Dinar and the NDA

Planet Dinar is a site run by Blaino, also known as Blaine Fogel.  I consider him to be another one of the hack gurus because of statements like you will see below.  Click the pictures to enlarge.  Don’t look at this article as I’m attacking someone, look at it as I’m informing you of someone.

Here is the Planet Dinar / Dinar Inc private call about exchanging the 50 Iraqi Dinar note.  Funny how nobody predicted this even though they all claim to have sources inside of Iraq:

2015 0228 Blaino Planet Dinar (50 Dinar Note Removal) He was completely surprised by this as it goes against everything he was saying for years.

As you all know about me, I don’t like to discuss rates because if you can’t predict what the U.S. Dollar VS the Japanese Yen exchange rate will be, how can you possibly know what a rate will be for a currency that is not being traded internationally like the Iraqi Dinar?  Think about this, if these guys really knew, don’t you think they would be investing in other currencies?  The answer is simple, they don’t have real intel, they are simply there to pump dinar and keep you coming back each week to either their paid forums or their conference calls.  Hammerman used to work with Blaino on Planetdinar but if you check now, they are not together.

If you were looking to buy Iraqi Dinar online then you need to know that some places will rip you off, so shop around.  With that being said, the NDA (Non Disclosure Agreement) I found on the site is from the following link: planetofdinar.com/members/nda.pdf  There are similar NDA documents posted at http://vndbonanza.com/docs/ if you are interested.  There is always the chance that these links will come down, so check archive.org to make sure they are in there.

Now, I am not going to tell you whether or not you should sign this or any currency NDA, I wouldn’t sign it, and I know at least one attorney who advised against these types of NDAs.  What is the agenda?  Well, if you download the NDAs, you will discover that for yourself.

As for the site, it’s simply a dinar forum, but I’m addressing a scam alert because of the whole issue with people who are expecting group rates on the dinar.  Apparently, if you sign an NDA, you agree to keep quiet, but you get a higher rate on your currency exchange.  I think that this is crazy.  I have never heard of a group rate discount on currency exchanges.  I have done forex trading since 2001 when I was in the United States Navy.  Iraqi currency is no different from other currencies, no group rate exists for large purchases or sales, this is simply a myth.

Regarding the corp trust information, I don’t want people to think that just because you have Iraqi Dinar, Vietnamese Dong or even Zimbabwe Dollars that you need to get involved with trust packages.  If you sign up on this site, you will receive emails for the following: 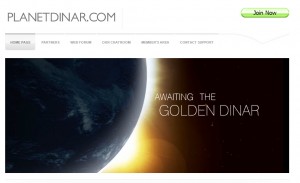 So Blaino runs the websites, his picture is below.  All I can say is this, he didn’t try to cover up his information very well.  It’s quite easy to find him.  Anyways, so they have conference calls every Tuesday and Thursday where you will hear about how soon the RV of the Dinar is and why you need to get asset protection in the form of ten Irrevokable Trusts, what rubbish.  Nobody who is broke (the majority of Americans) can afford this package, nor will they need it, and finally, it’s not worth it.  The full package is $20,000, yes, you read that right, and I have the conference call recording to prove it.  I would be very careful if you decide to visit Planet Dinar or if you sign up with their trust people, I don’t trust them.