Iraq is not doing well.  Here are the reasons for the loan:

Last Updated On: August 26, 2016
By: Nick Giammarino
Subscribe to the Dinar RV Newsletter – [OptinLink id=1]CLICK HERE TO SUBSCRIBE TO THE FREE NEWSLETTER[/OptinLink]

The loan will be provided under the Stand-By Arrangement facility and also includes measures to protect vulnerable populations—critical in a time of ongoing conflict, which has resulted in over 4 million internally displaced people. 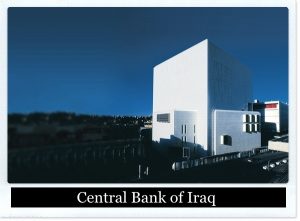 Image of the Central Bank of Iraq above

The program builds upon the success of the recent Staff-Monitored Program, which the authorities started in November 2015 to address the double shock of ISIS attacks and the sharp drop in global oil prices, and will help close a financing gap of about $18 Billion.

Speaking to IMF News, Christian Josz, IMF mission chief for Iraq, explains the underlying reasons for the loan and the main goals of the IMF-supported program.

IMF News: Why is Iraq requesting financial assistance from the IMF now?

Josz: Iraq has been hit with a double shock for an extended time period. First, the ISIS insurgency since mid-2014 has created a humanitarian and social crisis that unfolded into millions of internally displaced persons, with destruction to assets and infrastructure leading to disruptions in production and in trade routes. The non-oil economy sharply contracted as a result. Second, the steep fall in global oil prices—on which Iraq depends almost entirely for its government revenue—has made the situation worse, culminating in both internal and external imbalances, large and rising budget deficits and increasing public debt, as well as losses in official foreign exchange reserves and some pressure on the Iraqi Dinar.

As a result, the Iraqi authorities approached the IMF with a request for emergency assistance, and we worked with the authorities to provide emergency financing of US$1.2 billion in July 2015 under the Rapid Financing Instrument. However, the intensification of the two shocks thereafter led the authorities to request a longer-term engagement with us that would not only address the fallout from the crisis, but also lay the ground for long-delayed, deep-seated reforms. In this vein, a staff-monitored program (a program with no attached lending) started in November 2015—at the Authorities’ request—to instill the necessary conditions, and build the required capacity and track record to move to the current Stand-By Arrangement.

IMF News: What are the key policy components of Iraq’s program and how will it help the country? 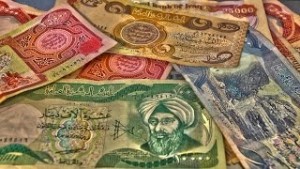 Josz: The program is designed with a focus on four key elements: reduce budget spending and restore public finances to a healthy state and stabilize debt; protect spending on the social front to ease the lives of the poorest, internally displaced people and refugees; improve the quality of public spending and prevent accumulation of unpaid debt through improvements in public financial management; and begin the process of restructuring state-owned banks to reduce their dominance in the banking system, thereby mitigating financial sector risks and preserving the sector’s stability.

IMF News: How has Iraq’s economy been affected by ongoing conflicts and will this hinder the program’s implementation?

Josz: On the one hand, the non-oil economy contracted by 19 percent in 2015 and is expected to continue to contract in 2016. On the other hand, the oil sector, thus far spared by the ravages of war, grew by 13 percent in 2015 and by more than 20 percent during the first five months of 2016, helping to support the broader economy, critical budget outlays, and official foreign exchange reserves amid the double shock.

While there are risks to program implementation—such as the fight against ISIS, subdued global oil prices, and uncertainty around the budget sharing agreement between the federal government and the Kurdistan Regional Government—the policy responses outlined above will help stabilize Iraq’s economy.

IMF News: Can you explain the significance of maintaining the Iraqi Dinar’s peg to the U.S. dollar?

Josz: Iraq has maintained a peg to the U.S. dollar for years, and it has served the Iraqi economy well. The peg helps provide stability amidst a highly uncertain environment, especially with policy capacity weakened by the fight against ISIS. Under current circumstances and given the nature of the shocks, moving towards more exchange rate flexibility would not be warranted for two key reasons.

First, Iraq is predominantly an oil exporter, and devaluing the Dinar would have minimal bearing on the economy’s overall trade competitiveness. Second, there is a notable degree of import dependence—almost half of Iraq’s consumption needs are imported—and devaluation would immediately trigger a spike in inflation for most food and other consumer goods, which would exacerbate already difficult social tensions. The authorities are committed to maintaining the Iraqi Dinar’s peg to the U.S. dollar under these circumstances, and we support this view.

IMF News: How will the program help protect the poor and internally displaced populations?

Josz: The program has set a floor on a number of budget items that are considered crucial for social spending, with the objective of protecting the most vulnerable. This covers spending directed towards the social safety net, the public distribution system (subsidies on food items, wheat, rice), agricultural product subsidies, transfers and assistance for internally displaced populations and refugees, and spending for salaries and goods and services by the ministries of health and education.

IMF News: What measures could the Iraqi government take now to lay the basis for private sector‑led growth in the future?

Josz: By preserving macroeconomic stability, including debt sustainability, the Iraqi authorities are laying the ground for private sector development. By maintaining fiscal discipline, they will create the fiscal space to pay their suppliers and international oil companies on time, which is essential to maintain financial sector stability and oil production. Furthermore, the authorities can also spur private sector-led growth by restructuring state-owned enterprises—including the six state-owned banks—and prioritizing investment projects, such as in the electricity sector, which will help improve infrastructure development. 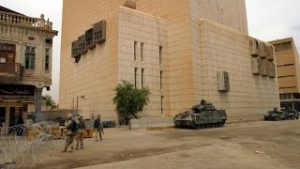 The Managing Director of the International Monetary Fund (IMF) approved a Staff-Monitored Program (SMP) 1for Iraq covering the period of November 2015-December, 2016, on which the authorities and staff had reached ad-referendum agreement in November 2015 (see Press Release No. 15/509).

Iraq is facing a double shock arising from ISIS attacks and the sharp drop in global oil prices. The conflict is hurting the non-oil economy through destruction of infrastructure and assets, disruptions in trade, and deterioration of investor confidence. The impact of the oil price decline—already felt in 2014—intensified in 2015, affecting the budget, the external sector, and medium-term growth potential. The authorities are responding to the crisis with a mix of fiscal adjustment and financing.

To help address the present and urgent balance of payments and budget needs triggered by the ISIS attacks and the collapse in oil prices, the authorities have also requested an SMP to establish a track record of policy credibility to pave the way to a possible Fund financing arrangement. Under the SMP, the authorities will implement fiscal consolidation that will contain public expenditure in line with available revenue and financing, and aim to reduce the non-oil primary deficit by US$20 billion or 12 percent of non-oil GDP between 2013 and 2016. Under the SMP, agreement has also been reached on measures to strengthen public financial management, anti-money laundering and countering the financing of terrorism (AML/CFT), and financial sector stability.

The IMF has assisted Iraq in strengthening economic institutions and in providing advice to the government on economic policies and reforms for more than a decade. IMF staff will work closely with the authorities to monitor progress in the implementation of their economic program. In addition, the IMF will continue to provide technical assistance to support Iraq’s capacity-building efforts and its reform program.

1 An SMP is an informal agreement between country authorities and Fund staff to monitor the implementation of the authorities’ economic program. SMPs do not entail financial assistance or endorsement by the IMF Executive Board.